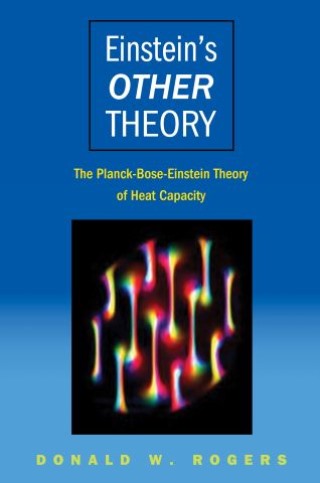 The Planck-Bose-Einstein Theory of Heat Capacity

Einstein's theories of relativity piqued public curiosity more than any other mathematical concepts since the time of Isaac Newton. Scientists and non-scientists alike struggled, not so much to grasp as to believe the weird predictions of relativity theory--shrinking space ships, bending light beams, and the like. People all over the world watched with fascination as Einstein's predictions were relentlessly and unequivocally verified by a hundred experiments and astronomical observations.


In the last decade of the twentieth-century, another of Einstein's theories has produced results that are every bit as startling as the space-time contractions of relativity theory. This book addresses his other great theory, that of heat capacity and the Bose-Einstein condensate. In doing so, it traces the history of radiation and heat capacity theory from the mid-19th century to the present. It describes early attempts to understand heat and light radiation and proceeds through the theory of the heat capacity of solids. It arrives at the theory of superconductivity and superfluidity--the astonishing property of some liquids to crawl spontaneously up and out of their containers, and the ability of some gases to cause light to pause and take a moment's rest from its inexorable flight forward in time. Couched in the terminology of traditional physical chemistry, this book is accessible to chemists, engineers, materials scientists, mathematicians, mathematical biologists, indeed to anyone with a command of first-year calculus. In course work, it is a collateral text to third semester or advanced physical chemistry, introductory statistical mechanics, statistical thermodynamics, or introductory quantum chemistry. The book connects with mainstream physical chemistry by treating boson and fermion influences in molecular spectroscopy, statistical thermodynamics, molecular energetics, entropy, heat capacities (especially of metals), superconductivity, and superfluidity.