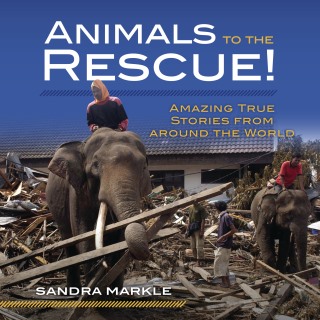 Animals to the Rescue!

Amazing True Stories from around the World

Did you know that rats can be heroes? In the southern African nation of Mozambique, these amazing rats (which are the size of a small house cat) have helped clear landmines. And that's just one of the incredible stories in this book.

Award-winning author Sandra Markle has collected wonderful true stories about animals that have rescued humans—and other animals. With fabulous photographs of the featured animals, this book is sure to appeal to animal lovers everywhere!

Markle is also the author of the Insect World series and several single titles. Her book Rescues! was named a Best Book by the Society of School Librarians International and a Recommended Title of Outstanding Nonfiction by the National Council of Teachers of English’s (NCTE) Orbis Pictus Award committee; Animal Heroes was named a 2008 Lasting Connections title by Book Links. Markle lives in Lakewood Ranch, Florida with her husband, photographer Skip Jeffery.