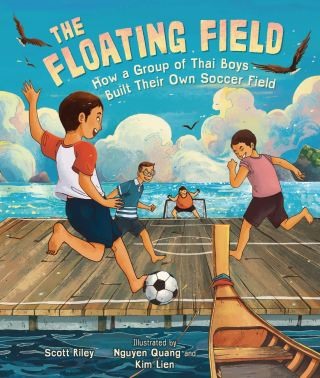 How a Group of Thai Boys Built Their Own Soccer Field

On the island of Koh Panyee, in a village built on stilts, there is no open space. How will a group of Thai boys play soccer?

After watching the World Cup on television, a group of Thai boys is inspired to form their own team. But on the island of Koh Panyee, in a village built on stilts, there is no open space. The boys can play only twice a month on a sandbar when the tide is low enough. Everything changes when the teens join together to build their very own floating soccer field.

This inspiring true story by debut author Scott Riley is gorgeously illustrated by Nguyen Quang and Kim Lien. Perfect for fans of stories about sports, beating seemingly impossible odds, and places and cultures not often shown in picture books.

Scott Riley: Scott Riley is a middle school English teacher who was inspired to write about Prasit Hemmin and Koh Panyee's floating soccer field after visiting the Thai island in 2018. He currently lives with his family in Singapore.