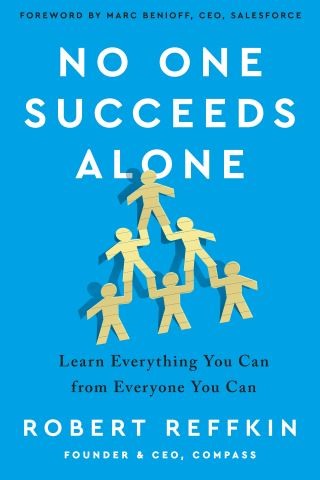 No One Succeeds Alone

Learn Everything You Can from Everyone You Can

The inspirational story of Compass CEO Robert Reffkin, whose mother, mentors, and search for belonging taught him valuable lessons that anyone with a dream can put into action today to improve their own quality of life

No one expected a dreadlocked fifteen-year-old who cared more about his DJ business than his homework to grow up to become one of the youngest-ever White House fellows, create multiple nonprofits, and found a multibillion-dollar company. But Robert Reffkin — raised by an Israeli immigrant single mother, disowned by his maternal grandparents for being Black, and abandoned by his father — has always defied the odds.

Compass’s mission is to help everyone find their place in the world, and in these pages, Reffkin distills the wisdom he’s gathered along his journey. Each chapter offers a part of his life story and a practical lesson, such as:

The advice in No One Succeeds Alone will inspire you to dream bigger than you ever have before, realize your full potential, and give back by helping make someone else’s dreams come true, too. All author proceeds from No One Succeeds Alone are being donated to nonprofits that help young people realize their dreams.

Robert Reffkin:
ROBERT REFFKIN is a husband, a father, and the founder and CEO of Compass, a real estate technology company that is now the largest independent brokerage in America, having helped clients buy or sell homes worth more than a quarter-trillion dollars since its founding. Reffkin graduated from Columbia in two and a half years, earned an M.B.A. from Columbia Business School and worked at McKinsey, Lazard, and Goldman Sachs. He ran fifty marathons, one in each U.S. state, to raise $1 million for charities — including for America Needs You, the nonprofit he founded to serve young people living below the poverty line who are the first in their families to go to college.