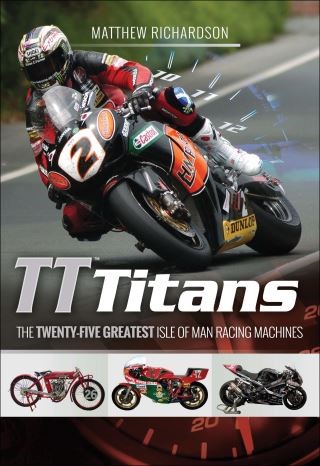 A motorcycle enthusiast offers in-depth, fully illustrated profiles of the 25 greatest machines to race the Isle of Man TT.

Since it began in 1907, the Isle of Mann Tourist Trophy has gained a well-deserved reputation as the most challenging—and dangerous—motorcycle race in the world. In TT Titans, Matthew Richardson explores a fascinating question: which motorcycles or sidecar outfits have made the strongest contributions to the race over the last century? As Richardson makes his choices, he describes each one in vivid detail.

Richardson recounts extraordinary achievements like lap records, race victories, technical innovations and other milestones. Modern bikes from BMW, Honda, Suzuki and Yamaha are featured alongside classic models from Matchless, Norton and Velocette. Richardson also includes profiles of the men who built and rode these exceptional machines—a list that includes many of the best-known names from every era of the sport, from Stanley Woods, Bob McIntyre and Mike Hailwood to Carl Fogarty, Joey Dunlop, Dave Molyneux and John McGuinness.

Matthew Richardson: Matthew Richardson is Curator of Social History at Manx National Heritage. He has a long term interest in military history, in particular the First and Second World Wars. This is his eleventh book for Pen & Sword, and is the culmination of many years of study and research into the role of the Isle of Man between 1939 and 1945\. He is fortunate enough to have met and spoken with many of the contributors whose words appear in this book.