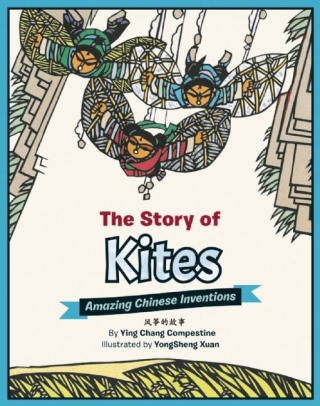 The Story of Kites

The three playful and creative Kang brothers (Ting, Pan, and Kùai) discovered four of China's most famous discoveries in the series Amazing Chinese Inventions. the brothers need to protect the rice harvest from the birds. Nothing works!

Then the boys get an idea: if they made wings, they could fly drive the birds from their rice fields! Using paper, straw, and feathers, the boys experiment with flying many different things, including themselves! What else can they create which will get the job done and be fun to fly at the same time? The story features an author’s note on the history of kites and instructions for making your own kite.

This fanciful blend of fact and imagination brings Asian culture alive for young readers. Children will enjoy the bright and bold artwork, created in the traditional Chinese style of hand cut, colored paper. Parents will enjoy the ingenuity of the main characters who teach adults a thing or two about inventiveness.

Teachers and librarians like the storybook’s historical references and how it features a bilingual translation in simplified Chinese - ideal for language classes, programs, and schools.

"Written to appeal to children in primary grades, the exciting story of the invention of kites is told in both English and Chinese/Mandarin narratives, with exciting, vibrant woodcut-style illustrations and brilliant primary colors."
- Midwest Book Review

Ying Chang Compestine:
Ying Compestine: Ying's dozens of children’s books have won many awards, including spots on the "best lists" from the ALA, Bank Street, Book Sense, and New York Times. She visits schools and teaches workshops internationally. She has written for magazines such as Cooking Light, Self, Men's Health, and Martha Stewart's Whole Living. Her website is www.yingc.com.

YongSheng Xuan illustrated the four volume "Story of" series. Educated at the renowned Central Arts and Crafts University in Beijing, China, he lives in Vancouver, Canada. His art has exhibited worldwide and appeared in Cricket magazine. His website is www.ysxuan.com.