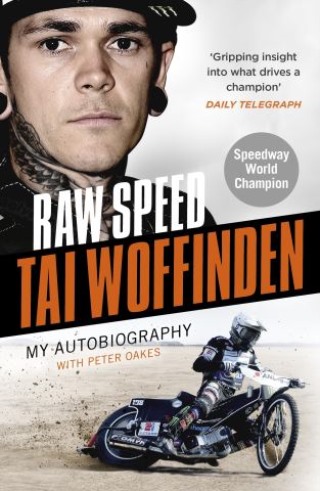 Raw Speed - The Autobiography of the Three-Times World Speedway Champion

The Perfect Christmas Gift for any Motorsport Fan

Following in his late father's footsteps, Tai Woffinden made his name as Britain's most successful speedway rider ever. Known for his speed on the tracks and his quirky tattoos, he is a popular figure within the sport and beyond it.

With a vast array of titles to his name, including youngest ever Grand Prix World Champion, achieved at the age of twenty-three, Tai has come a long way from his Scunthorpe roots. His love affair with speedway began when his family emigrated to Australia while he was a child, where he became a local champion while still at school. He has not been without his share of struggles, however. In 2010, he lost his father, the popular speedway rider Rob Woffinden, to cancer, which, combined with issues within his team, resulted in a difficult season. Then, in 2019, during his defence of his World Championship, he crashed heavily during a race in Poland and was badly injured, breaking his back.

Such setbacks do not keep true champions down for long, however - Tai will be back, to dazzle his thousands of fans with his unique combination of flamboyant skill and raw courage. Told with his trademark honesty and directness, his autobiography provides an eye-opening insight into the life of one of speedway's greatest talents and most beloved stars.

© images; not to be copied or reproduced without permission.

Tai Woffinden: Tai Woffinden was born in Scunthorpe in 1990, but moved with his family to Perth, Western Australia, at the age of four. He won his first speedway title there at the age of fifteen, and in the same year made his debut in the British Conference League, with Scunthorpe Scorpions. In 2007 he was crowned British Under 18 Champion, won the first of his two Under 21 titles in 2008, and went on to take the first of three successive senior championships in 2013.

He won the Speedway Grand Prix series in 2013, to become World Champion for the first time, a title he regained in 2015. When he did it again in 2018, he became the only British rider ever to win it three times, as well as being the youngest rider to have won the World Championship in the modern GP era. He is married to Faye and they have one daughter, Rylee-Cru, with a second child due in autumn 2019. As a family, they divide their time between this country and Australia, as well as Tai racing regularly in Poland and Sweden.