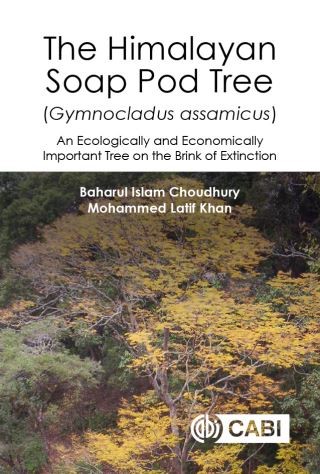 An Ecologically and Economically Important Tree on the Brink of Extinction

Extinction of species has alarmingly increased in recent decades due to anthropogenic activities, natural calamities and climate change. The life history, ecology and evolution of such species have often not been well studied. Gymnocladus assamicus is an archaic tree endemic to the Eastern Himalayan region of Northeast India. Locally known as 'Menangmanba-shi' by the Monpa tribe of Arunachal Pradesh (India), mature G. assamicus pods contain high saponin and are used traditionally for cleansing purposes and rituals. We rediscovered the species after more than 70 years from high altitude areas in the Himalayas through extensive field explorations and employing an ecological niche modeling approach. Our study revealed a very few actively reproducing mature G. assamicus trees surviving in unique microclimatic conditions. The species is classified as 'critically endangered' (IUCN red list). The book contains detailed information about G. assamicus and discusses its current distribution, population status, ethnobotanical uses and other ecological parameters. Major intrinsic and extrinsic factors that might be responsible for population decline are described. More importantly, we reported a very rare mating system known as 'androdioecy' in which male and hermaphrodite individuals co-exist in the natural population. Overall, the book highlights the story of a critically endangered tree species with a unique biological and socio-cultural importance and will serve as a case study and referencefor other similar species both locally and globally.