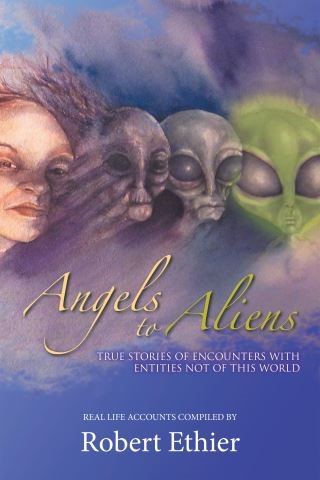 True Stories of Encounters with Entities Not of This World

Angels to Aliens is a collection of stories compiled after interviewing witnesses who had encounters with entities from other dimensions. Some of the tellers of these tales believe their stories were inspired by divine providence, and others claim to have seen something from the underworld whose intent was to do them great harm. The world is a strange place indeed.

Robert Ethier: Robert Ethier began his quest to document encounters with paranormal entities in 2007, but his interest really began much earlier. Within two weeks of moving into a new home on Cape Cod in the late 1970s, his family began to be harassed by an unseen entity that was determined to drive them out of the house. That story is documented in this book as “There Is Someone or Something in This House Besides Us.” Previously employed as a land surveyor and environmental specialist for thirty-five years, Robert currently works in municipal public health in Massachusetts.