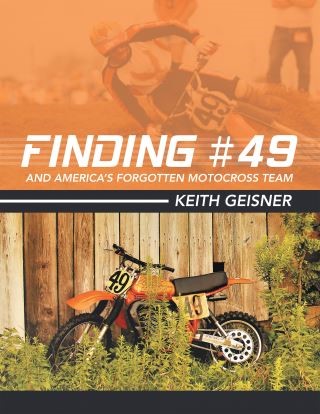 Valentino Rossi once said, “To be a great motorbike racer, the most important thing is passion for the bike.” Vintage motocross enthusiast Keith Geisner has this passion, and it leads him on a journey of discovery when he finds an old Harley-Davidson dirt bike for sale online. A mere moment’s pause on a photograph, and Keith becomes both restorationist and researcher of a piece of American motocross history. Through social media, emails, phone calls and sheer tenacity, Keith uncovers the bike’s unique history. His extensive research led him to motocross legends and Bill Davidson, the great-grandson of Harley-Davidson Motorcycle Co. founder William Davidson. His story is a detective novel for motorcycle enthusiasts where every page, like an enduro, is full of twists and turns.

I like to refer to the author as “Detective Geisner.” His tireless efforts to unearth historical details about the Harley-Davidson motocross project have no bounds and his enthusiasm for the subject borders on obsession. He has traveled extensively to meet and interview the riders, mechanics, and engineers who were involved. His “investigations” have turned up details about the MX project that were sometimes unknown even to those of us who worked on the H-D Factory team in those days. So, it’s fair and correct to say that this book is the definitive study of Harley-Davidson’s controversial participation in American motocross.

Keith Geisner is an avid motorcyclist who has owned hundreds of motorcycles and ridden thousands of miles on backroads, trails, tracks, and highways across the United States. He enjoys sharing his incredible first-hand encounters with some of the industry’s most influential and recognizable names. An engineer with more than two decades of experience in the automotive and aerospace industries, he uncovers the true story behind an all-but-forgotten piece of American motocross history in this book.