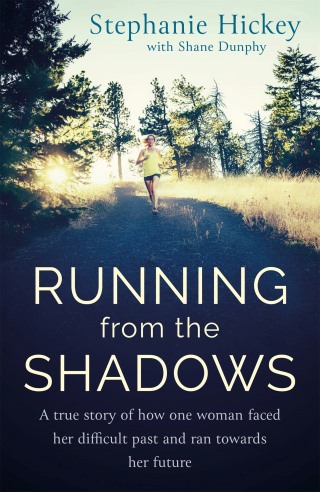 Running From the Shadows

In Running from the Shadows Stephanie Hickey tells, in her own words, how she survived abuse at the hands of a trusted family member and of how running, a simple physical activity helped her achieve mindfulness, but also to rediscover love and faith in her body - to reclaim it.

Charting her life growing up in the rolling countryside of Waterford in the safety of her beloved family to the moment her childhood was shattered, to the court case where she waived her anonymity, to how she was able to reclaim a sense of herself through the sport which became like a therapy, Running from the Shadows is told with humour, strength and incredible courage -- a book that reveals how, even when things seem at their bleakest, a run through the Irish countryside, can bring you back into the light.

Stephanie Hickey: Stephanie Hickey lives in County Waterford with her partner of sixteen years. She has four children and runs most days in the valleys of the townlands where she grew up. She ran a half-marathon six months after taking up running and she has never looked back.