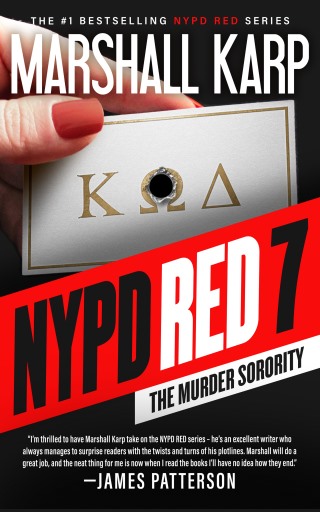 Finding a single assassin in a city of nine million is daunting.Finding five is a nightmare.

Join the NYPD Red team in their most explosive case ever. The series from James Patterson and Marshall Karp has always been a must-read. But Karp’s latest, NYPD Red 7: The Murder Sorority, tops them all, making it a must-read-now!

And that’s only the beginning. A network of professional assassins is on the loose in New York City. Trained by the US military, they’re on their own now, with a new unit called Kappa Omega Delta. Killers On Demand.

NYPD Red detectives Kylie MacDonald and Zach Jordan are called in to hunt them down, but these mercenaries are as gifted in the art of escape as they are in snuffing out lives.

It’s the biggest professional challenge the Red team has ever faced, and before it’s over, both Kylie’s and Zach’s personal lives will change. Forever.

Marshall Karp is an international #1 bestselling author, TV and screenwriter, and playwright. Working with James Patterson, Marshall cocreated and cowrote the NYPD Red series. After six bestsellers, Marshall will carry the series forward on his own, beginning with NYPD Red 7: The Murder Sorority. Marshall is also the author of Snowstorm in August, as well as the critically acclaimed Lomax and Biggs novels, featuring LAPD Detectives Mike Lomax and Terry Biggs. For over twenty years he has worked closely with the international charity Vitamin Angels, providing tens of millions of mothers and children around the globe with lifesaving vitamins and nutrients. More at www.KarpKills.com