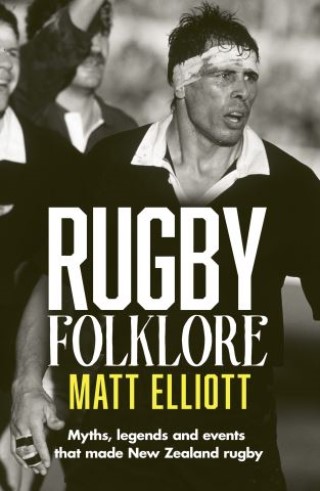 From superstitions to send-offs, All Black nick-names to on-field battles: Rugby Folklore is a miscellany of stories, quotes, and facts that are part of the fabric of New Zealand rugby.

New Zealand has played, celebrated and commemorated rugby like no other country. We took to the game in extraordinary numbers in the late nineteenth century. Rugby was the game for all. It became a sport in which names like Grizz, Tiny, Guzzler, Pinetree, Rimu, and the Paekakariki Express have made us feared and revered as the greatest rugby nation on earth.

Rugby Folklore is a book about matches won and lost, rivalries built and legends made. From on-field controversies, rugby songs, and what makes an All Black to Hika's great try, 'Bring Back Buck' and wind at Athletic Park so strong that Don Clarke watched a ball kicked for touch sail back over his head.

Covering the earliest days of club-rugby through to the modern-day All Blacks, this collection of interesting facts, unforgettable quotes and tall tales will you leave you looking on our national game with pure unbridled pride ... and a little disbelief!

'Remember that rugby is a team game; all 14 of you make sure you pass the ball to Jonah.' - Fax to the All Blacks during the 1995 RWC

Matt Elliott: Matt Elliott is one of New Zealand's busiest authors, writing across genres for readers of all ages. His best-selling biography of comedian Billy T James was the basis for both a television biopic and cinema documentary. A winner of the Book of the Year and Best Non-fiction Book awards at the New Zealand Children's Book Awards, he has previously written four rugby titles. He lives in Birkdale, on Auckland's North Shore, and this year coached his local college's Fifth grade (Open weight) rugby team.Visit: mattelliottnz.com