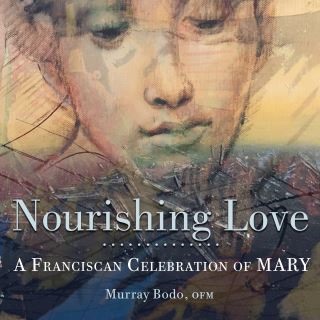 A Franciscan Celebration of Mary

St. Francis had a deep and lifelong devotion to Mary, the Mother of God, committing his order to her care. Franciscan Murray Bodo explores that relationship in this evocative and deeply spiritual encounter with Mary. At the heart of the book, Fr. Murray gives us a glimpse into all that Mary treasured in her heart during her extraordinary lifetime.  He shares poems and stories of his own complicated relationship with Mary. He examines Marian devotion across the centuries, particularly through the lens of great Franciscans such as Blessed John Duns Scotus and St. Bonaventure. A collection of Marian prayers rounds out this Franciscan celebration of Mary of Nazareth, Mother of God, Queen of the Angels.

“There is something about a nourishing love that was central to the spirituality of St. Francis. He used to say to his Brothers that they were to love one another, as far as grace enables them to do so, the way a mother loves and nourishes the child of her flesh. And for St. Francis Mary was the mother because of the way she loved and nourished Jesus.”—Murray Bodo

Murray Bodo: MURRAY BODO, OFM, a Franciscan priest, is the award-winning author of numerous books, including the bestselling Francis: The Journey and the Dream, Francis and Jesus, Mystics: Twelve Who Reveal God’s Love, nine books of poetry, and most recently Surrounded by Love: Seven Teachings from Saint Francis. Friar Murray has had his poems, stories and articles published in magazines and literary journals in the United States, England, and Ireland. He was a founding staff member of the Franciscan Pilgrimages Program and has led yearly pilgrimages in Assisi and the surrounding areas for over forty years. He resides in Cincinnati, Ohio.