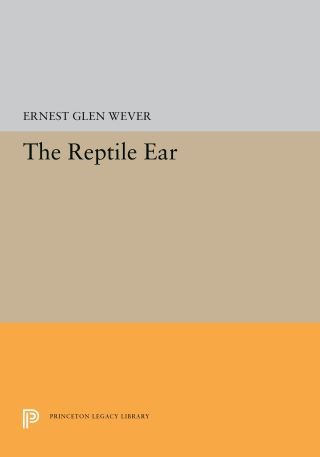 In this definitive work, Ernest Glen Wever establishes the evolutionary importance of the reptile ear as the origin of the higher type of auditory apparatus shared by man and the mammals. Tracing the development of the auditory receptor in the living reptiles, he examines the use of a variety of mechanisms and principles of action by that receptor. While some of the material in this book has appeared previously in journal articles, most of it is presented here for the first time.
Basing this study on his twenty years of research at Princeton's Auditory Research Laboratories, Professor Wever treats in anatomical and functional detail the auditory mechanism in about 250 species and subspecies of reptiles. The anatomical treatment rests on dissections and histological examinations of the ears in serial section, and portrays the relevant features in drawings that represent particular views of reconstructions. The author evaluates the performance of thesse ears electrophysiologically, in terms of the electrical potentials of the cochlea, paying particular attention to problems of the transmission of vibrations inward to the cochlea and the actions there in stimulating the sensory cells.
Professor Wever finds that the cochlea emerged independently from the non-auditory labyrinth in three different vertebrate groups: fishes, amphibians, and reptiles. It was among the reptiles, however, that the vertebrate ear took on a more advanced configuration from which it further evolved along separate lineages in the birds and mammals.
Ernest Glen Wever is Eugene Higgins Professor of Psychology Emeritus at Princeton University.

The Princeton Legacy Library uses the latest print-on-demand technology to again make available previously out-of-print books from the distinguished backlist of Princeton University Press. These editions preserve the original texts of these important books while presenting them in durable paperback and hardcover editions. The goal of the Princeton Legacy Library is to vastly increase access to the rich scholarly heritage found in the thousands of books published by Princeton University Press since its founding in 1905.