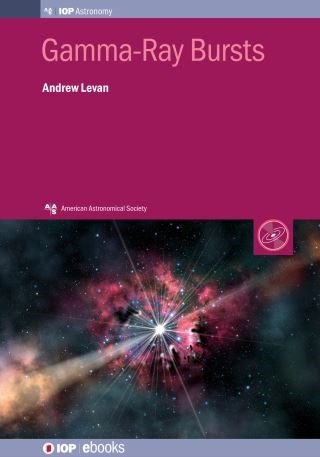 As the most powerful explosions that occurs in the universe, gamma-ray bursts (GRBs) are one of the most exciting objects being studied in astrophysics. Creating more energy than the Sun does in its entire lifetime, GRBs create a blaze of light that will outshine every other object visible in the sky, enabling us to measure galaxies that are several million years old.

GRBs cover various areas of astronomy and interest in them reaches a wide range of fields. Andrew Levan explores the fascinating history of these astronomical occurrences and details our current understanding of GRBs. The science behind them is rapidly moving and this book examines the knowledge that we now have as well as the questions that are continually being raised. Predominantly aimed at PhD students and researchers in the area, Gamma-Ray Bursts addresses this captivating topic and outlines the principles and initial applications of a fascinating astronomical phenomena

Andrew Levan is a professor of astronomy and astrophysics at The University of Warwick. He has spent most of his career focussing on the origins of gamma-ray bursts and their use as cosmic probes, utilising a wide range of ground- and space-based telescopes across the electromagnetic spectrum.