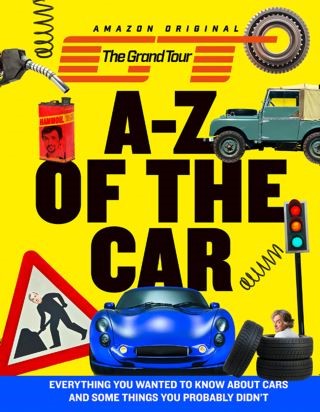 The Grand Tour A-Z of the Car: Everything you wanted to know about cars and some things you probably didn’t

Did you know there are over 47,000 facts in the world?* And the good news is, many of them are in this book. That’s right, The Grand Tour A-Z of the Car is the only reference guide you need for cars, driving and all related matters, especially if you’re not too fussed about those facts being accurate.

In this lavishly tooled book you will find a rich and satisfying collection of motor-related informations from the origins of Porsche and the fate of Lada to the dark history of the Wankel engine and the correct name for those weird little hairs on new tyres.

Throughout the book, Jeremy Clarkson, Richard Hammond and James May are on hand to share their knowledge and wisdom, and then we’ve made the pictures bigger to fill in the gaps around it.

The Grand Tour A-Z of the Car – literally bursting with facts!**

The Grand Tour stars Jeremy Clarkson, Richard Hammond and James May as three middle aged men who should know better. The trio previously worked on an obscure BBC car show before hitting the big time with The Grand Tour which is an epic show about adventure, excitement and friendship. As long as you accept that the people you call friends are also the ones you find most annoying.