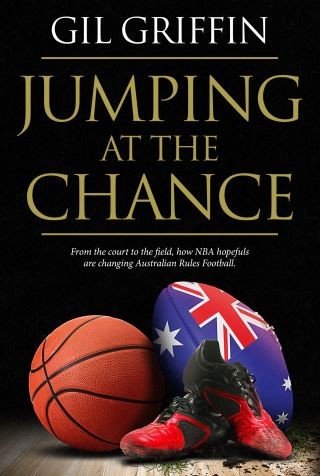 Jumping at the Chance

From the Court to the Field, How NBA Hopefuls are Changing Australian Rules Football

The true story of how professional Australian Rules Football found an unlikely new source of talent in the United States.

Though most Americans automatically think “rugby” when they hear or read the phrase “Australian football,” the two sports actually have very little in common besides tackling and kicking. “Footy,” as this unique sport is known in Aussie circles, bears more resemblance to American athletics, requiring the skill and grace of basketball combined with the physical toughness and endurance of American-style football. The only thing it apparently didn’t require was actual Americans. Until now.

Scouts from the Australian Football League (AFL) realized that a key position on their teams—called the “ruckman”—required both the height and ball handling skills readily found in American basketball players. What began as an unlikely experiment of cross-breeding sports talent has led to a growing expedition of NBA hopefuls from NCAA athletic programs—including Oklahoma State, Morehead State, and the University of Arizona—looking to make their way in a game most of them had never even seen played before.

In Jumping at the Chance, longtime Aussie football fanatic Gil Griffin delivers a riveting account of these American athletes who go to the other side of the world in search of their dreams of glory. From learning an entirely foreign sport from the ground up, to coping with what it means to be a team member in a different culture, to gaining not only acceptance but ecstatic support from the rabid footy fans, their stories are much like Australian Rules football itself—sometimes humorous, sometimes heartbreaking, always inspiring.

Gil Griffin: Gil Griffin lives in Playa Del Rey, California, and is a journalist and teacher of English and history. He has written for the San Diego Union-Tribune, the Albuquerque Tribune and the Washington Post and has covered the AFL for the league’s official publication, the Football Record, the Perth, Australia daily newspaper, WAToday, SBNation, and Vice Sports. Gil fell in love with Australian Rules football in the late 1990s on his first trip to Australia. He has appeared on Australian television as a guest commentator on Australian Rules football on such shows as “AFL360,” “The Marngrook Footy Show,” “Sunrise,” and “Sunday Night.