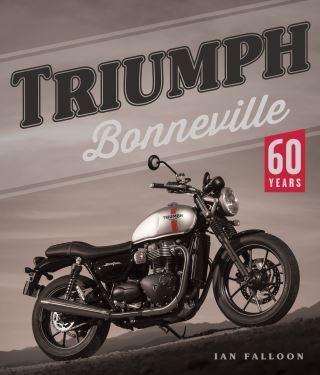 Triumph Bonneville: 60 Years is a celebration one of motorcycling’s most iconic and beloved bikes.

The Bonneville's story is one of successes and challenges as Triumph grew steadily in the post-World War II decades to become America's most successful "import" motorcycle marque. Triumph won every championship worth winning, owned the world speed record for fifteen years, and wooed Hollywood's hottest stars.

Bonneville was Triumph’s halo machine, one of the highest performance motorcycles of the 1960s. However, as competing marques eventually eclipsed the Bonneville in the 1970s, Triumph management struggled, leading first to bankruptcy and then to the demise of the company in 1983.

Triumph was resurrected by British industrialist John Bloor in the late 1990s to become a twenty-first century global success story, which includes a revived and thoroughly retro-contemporary Bonneville range.

Ian Falloon: Ian Falloon was born in New Zealand and studied engineering and music at Victoria University, Wellington. After a motorcycle accident brought an end to his career as a symphony orchestra oboist, he began writing articles about motorcycles for magazines including Classic Bike, Cycle World, Motorcyclist, Two Wheels, Motorcycle Sport, and Australian Motorcycle News. His first book, The Ducati Story, has run to several editions and has been published in three languages. The success of The Ducati Story led to a series of Ducati books and histories of Honda, Kawasaki, BMW, and Moto Guzzi motorcycles including Motorbooks titles The Complete Book of Ducati, The Complete Book of Moto Guzzi, The Complete Book of Triumph Motorcycles, and The Art of Ducati. With an interest and passion spanning decades, Ian now concentrates on collecting and restoring older Italian motorcycles, particularly Ducati, MV Agusta, Laverda, and Moto Guzzi. He lives in Melbourne, Australia, and is ably supported in his projects by his family.