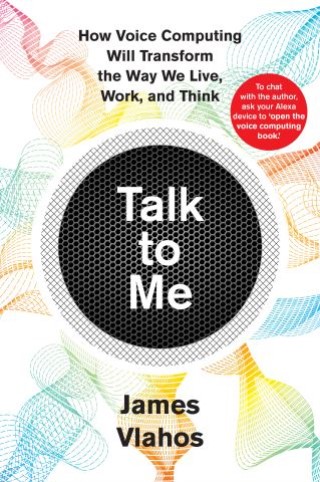 How Voice Computing Will Transform the Way We Live, Work, and Think

**To chat with the author, ask your Alexa device to "open the voice computing book."**

The next great technological disruption is coming

The titans of Silicon Valley are racing to build the last, best computer that the world will ever need. They know that whoever successfully creates it will revolutionize our relationship with technology—and make billions of dollars in the process. They call it conversational AI.

Computers that can speak and think like humans may seem like the stuff of science fiction, but they are rapidly moving toward reality. In Talk to Me, veteran tech journalist James Vlahos meets the researchers at Amazon, Google, and Apple who are leading the way. He explores how voice tech will transform every sector of society: handing untold new powers to businesses, overturning traditional notions of privacy, upending how we access information, and fundamentally altering the way we understand human consciousness. And he even tries to understand the significance of the voice-computing revolution first-hand — by building a chatbot version of his terminally ill father.

Vlahos’s research leads him to one fundamental question: What happens when our computers become as articulate, compassionate, and creative as we are?

James Vlahos:
JAMES VLAHOS covers the frontiers of technological change for publications like Wired, the New York Times Magazine, Popular Science, and Scientific American; he also writes for The Atlantic and GQ. In 2017 he engineered a chatbot that helps preserve the personality and tell the life story of his late father, a project that resulted in a Wired cover story and attracted attention from around the world. He lives in El Cerrito, California.