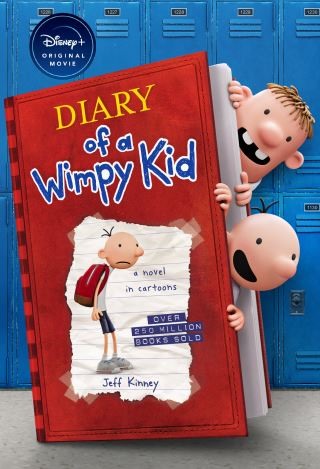 In 2007, Diary of a Wimpy Kid was published, introducing readers to Greg Heffley and his family, his best friend Rowley Jefferson, and the dreaded Cheese Touch.

More than 250 million copies later, Diary of a Wimpy Kid has become a beloved book all around the world. and now, for the first time ever, Greg’s diary—um, make that journal—is coming to life in a full-color, 3D animated Disney+ production.

Whether you’re meeting Greg for the first time or you’re a lifelong fan of Jeff Kinney’s hilarious series, you’ll love diving into the Wimpy Kid universe.

Jeff Kinney:
Jeff Kinney is a #1 New York Times bestselling author of the Diary of a Wimpy Kid series and the Awesome Friendly Kid series. He is a six-time Nickelodeon Kids’ Choice Award winner for Favorite Book and has been named one of Time magazine’s 100 Most Influential People in the World. He spent his childhood in the Washington, D.C., area and moved to New England, where he and his wife own a bookstore named An Unlikely Story.