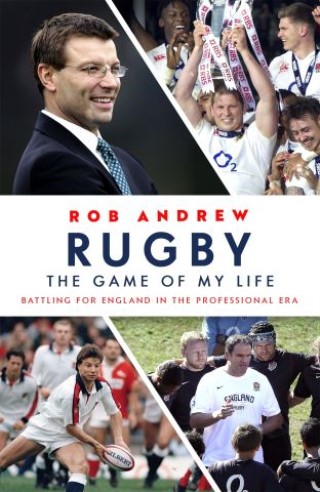 Rugby: The Game of My Life

Battling for England in the Professional Era

Rob Andrew is one of the key figures in modern rugby history: an outstanding international who won three Grand Slams with England and toured twice with the British and Irish Lions, he also played a central role in the game's professional revolution with his trailblazing work at Newcastle. During a long spell on Tyneside, he led the team to a Premiership title at the first opportunity, brought European action to the north-east and gave the young Jonny Wilkinson his break in big-time union by fast-tracking him into the side straight out of school.

What happened off the field was equally eventful. Rob produced 'The Andrew Report' - the most radical of blueprints for the future of English rugby - and then, over the course of a decade as one of Twickenham's top administrators, found himself grappling with the extreme challenges of running a game repeatedly blown off course by the winds of change. He did not merely have a ringside seat as one of the world's major sports went through its greatest upheaval in a century: more often than not, he was in the ring itself.

Born in 1963, Rob Andrew was educated at Barnard Castle School, County Durham, where he was a contemporary of Rory Underwood. He then went on to Cambridge University where he became a double blue, not only playing rugby for the university but captaining the cricket side.

Rob was a star player for Wasps, Newcastle, England, and the British & Irish Lions. After retiring from playing he went on to be Director of Rugby for Newcastle and then Director of Elite Rugby at the RFU.

He is currently the CEO of Sussex County Cricket Club.