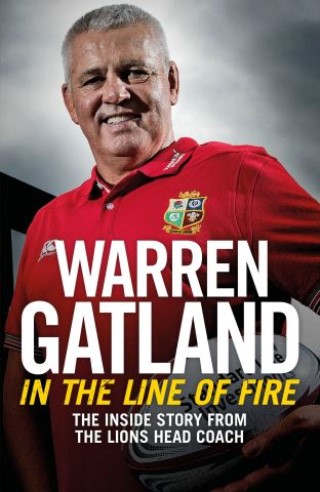 In the Line of Fire

The Inside Story from the Lions Head Coach

'"Draw"' is an inadequate way to describe what the Lions did here. They stopped one point short of a miracle.' Daily Telegraph

Warren Gatland's In the Line of Fire is the ultimate chronicle of this summer's remarkable Lions tour to New Zealand - home of the fearsome All Blacks, the double world champions - which culminated in an historic and nerve-shredding series draw.

The book is the Head Coach's candid record of the perspiration and inspiration, the withering ferocity,and the turbulent peaks and troughs which go hand-in-hand with one of sport's toughest challenges.

It gives rugby fans an unparalleled front-row seat with the squad and coaching team during every facet of preparing for and executing a successful tour on the opposite side of the planet, recounting intriguing details on everything from pre-tour planning and strategy, to on-tour experiences, analysis and decision-making.

It all adds up to a thrillingly definitive exposition and post-mortem of a mind-blowing six weeks in the cauldron which forged the mighty All Blacks.

Warren Gatland:
Born in Hamilton, New Zealand, in 1963, Warren Gatland played rugby for the provincial side Waikato for eight years, and made 17 appearances for the All Blacks, before turning to coaching. He was the Head Coach of the British & Irish Lions squad which recorded an epic and thrilling Test series draw against the mighty All Blacks in 2017. The result was the first time the Lions had not lost a series in New Zealand since 1971. Gatland also led the Lions on their triumphant tour of Australia in 2013, and he served as Assistant Coach on the 2009 tour of South Africa. After a dozen years at the helm, Gatland left his post as Head Coach of Wales after the 2019 World Cup. In that time, the Welsh have reached two World Cup semi-finals, won three Grand Slams and the Six Nations four times. During his career, Gatland has also coached Connacht and the Irish national team, as well as Waikato and Wasps.