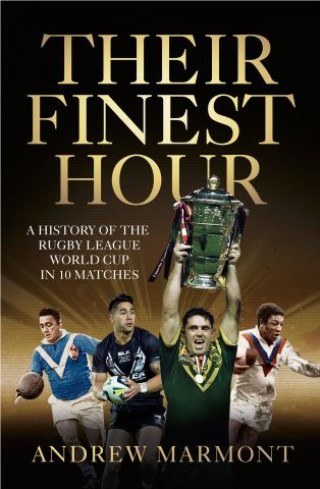 A History of the Rugby League World Cup in 10 Matches

The story of the Rugby League World Cup, vividly brought to life with first-hand stories from the players, coaches and administrators who were behind the big moments.

More than sixty years ago, Paul Barrière decided to host rugby league's first ever World Cup tournament. An enthralled Parisian public stood on concrete bleachers as their country fought gallantly in the final after suffering total rugby league abolishment a few years earlier. Each of the four teams lacked resources and money, with Britain not having cash to employ a coach or make their team blazers.

Fast-forward to 2017 and the game's elite have access to sports scientists, earn high six-figure salaries and train in English Premier League-style facilities. Spectators can sit in lavish corporate boxes or the comfy surroundings of top-class stadiums, as global sponsors add their support behind a tournament that has set new standards in sporting excellence.

From Great Britain training with a sock wrapped in a vest, Graeme Langland's 'try that wasn't', the violent 1960s, how New Zealand got Wayne Bennett, Wales and USA's gallant performances and England's epic semi-final against the Kiwis, this is a narrative of what made the World Cups so enthralling.

From interviewing rugby league's biggest names like Johnny Whiteley, Wally Lewis, Dean Bell and Glenn Lazarus to master coaches such as Clive Griffiths, Ricky Stuart and Frank Endacott, Marmont brings together an exciting mixture of stories, anecdotes and interviews that will appeal to both rugby league supporters and anyone who loves a good sporting read.

Andrew Marmont was born in Auckland, New Zealand, and fell in love with Rugby League when the Auckland Warriors joined the ARL competition in 1995. After graduating from the University of Auckland in 2007, Andrew moved to France before settling in Melbourne. Andrew writes for Big League, Rugby League World and Inside Sport. He also writes and presents sports programs for Commentary Box Sports.