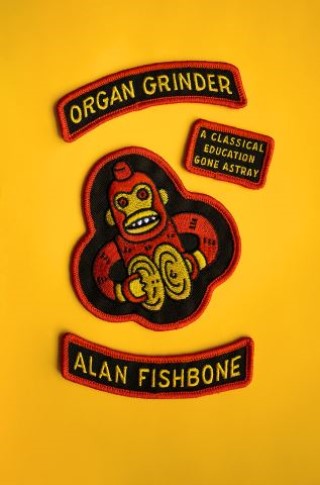 After my accident, I thought I was done with bikes. Until a few years ago—I was lying in bed having trouble sleeping when I heard a voice say to me, “Alan, get a Harley and ride to Death Valley.” I didn’t even like Harleys. And I didn’t believe that God had called down and told me to get one. It seemed unlikely that the monotheistic God we’re stuck with would endorse a brand of motorcycle—maybe the pagan gods of antiquity would. Zeus might have ridden a Harley, or Apollo a BMW; you can imagine Aphrodite on the back of Ares’ Ninja, zooming around the planets with a golden thong sticking up over the back of her toga. Even that twerp Hermes on a Vespa. Those gods liked to drink, and screw, and run around like bikers, but not Yawheh—strictly black limousines and heavy security for that guy. Thou shalt not ride. Thou shalt not be free. Thou shalt pay off the debt of thy sins to eternity.

So begins one of the salty, sharp-eyed anecdotes that fill the pages of Organ Grinder, a book-length essay written by Alan Fishbone, a motorcycle-riding scholar of ancient Greek and Latin. In a series of short pieces inspired by Horatian satire, Fishbone bounces from gonzo fever-dream to philosophical treatise, investigating the conflicts between idealism and cynicism, love and sex, body and soul. One part Plato, one part Aristophanes, two parts Easy Rider, Organ Grinder is a heady cocktail of lewd wisdom—Zen and the Art of Motorcycle Maintenance for our own, irreverent age.

Alan Fishbone: Alan Fishbone has an M.Phil. in Classics from Columbia University. He has worked as a teacher of English and aikido; as a translator of Latin, ancient Greek, and Spanish; and as a bouncer, bartender, construction worker, and professor of Classics. He lives and works in New York City.