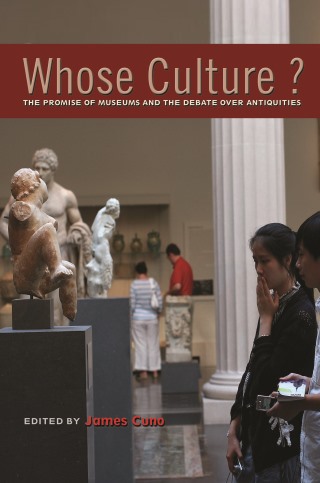 The Promise of Museums and the Debate over Antiquities

The international controversy over who "owns" antiquities has pitted museums against archaeologists and source countries where ancient artifacts are found. In his book Who Owns Antiquity?, James Cuno argued that antiquities are the cultural property of humankind, not of the countries that lay exclusive claim to them. Now in Whose Culture?, Cuno assembles preeminent museum directors, curators, and scholars to explain for themselves what's at stake in this struggle--and why the museums' critics couldn't be more wrong.


Source countries and archaeologists favor tough cultural property laws restricting the export of antiquities, have fought for the return of artifacts from museums worldwide, and claim the acquisition of undocumented antiquities encourages looting of archaeological sites. In Whose Culture?, leading figures from universities and museums in the United States and Britain argue that modern nation-states have at best a dubious connection with the ancient cultures they claim to represent, and that archaeology has been misused by nationalistic identity politics. They explain why exhibition is essential to responsible acquisitions, why our shared art heritage trumps nationalist agendas, why restrictive cultural property laws put antiquities at risk from unstable governments--and more. Defending the principles of art as the legacy of all humankind and museums as instruments of inquiry and tolerance, Whose Culture? brings reasoned argument to an issue that for too long has been distorted by politics and emotionalism.

James Cuno: James Cuno is president and CEO of the J. Paul Getty Trust and former director of the Art Institute of Chicago. His books include Who Owns Antiquity?: Museums and the Battle over Our Ancient Heritage (Princeton).