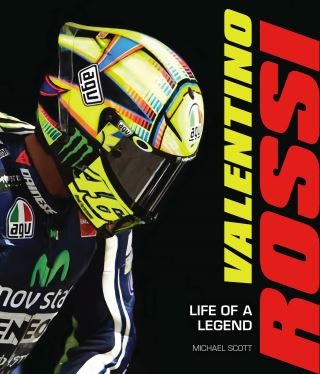 Life of a Legend

From the day he was born into a racing family on February 16, 1979, Rossi was destined for racing greatness. Rossi started his international racing career in 1996, riding for Aprilia in the 125cc class, and won his first World Championship the following year.  Rossi’s career would see him go on to win nine Grand Prix World Championships, score 87 wins in 500cc/MotoGP, and many more accolades.

This visual biography covers this incredible racer’s journey, his victories, rivalries, and transitions from brand to brand. See his incredible battles against the likes of Max Biaggi, Sete Ginbernau, and Dani Pederosa, and why they inspired three films (Faster, Fastest, Hitting the Apex).

Get to know Rossi’s incredible charm and wit, and why he has achieved rock-star status among racing fans.

Michael Scott: A leading MotoGP commentator for more than 30 years, Michael Scott's reports highlight not only the technical and sporting but also the extraordinary people – including highly commended biographies of World Champions Barry Sheene and Wayne Rainey. As well as a major history of the sport, the magazine highlights include regular reports and columns for Cycle News in the USA and Australian Motorcycle News, as well as major UK publications including Motorcycle News. Since 1990 Scott has edited the prestigious Motocourse annual, the bible of motorcycle racing. He also played a leading role as expert commentator in several motorcycle racing films, including the popular series "Hitting the Apex", "Faster" and "Fastest", as well as "The Unrideables" and the official 75th anniversary Dorna film and book Racing Together 1949-2016.