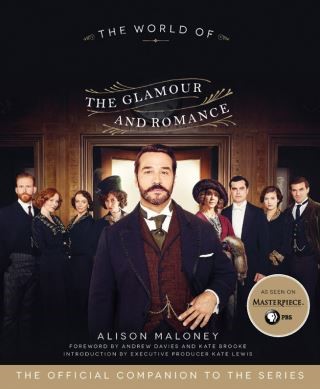 The World of Mr. Selfridge

The Glamour and Romance

The official, full-color, illustrated, behind-the-scenes companion to the lavish hit ITV and PBS television series Mr. Selfridge that vividly brings into focus the remarkable man and his time.

Set at the crossroads between the old and the new—when the Victorian and Edwardian eras gave way to the modern age—Mr. Selfridge illuminates the passions, drama, tensions, and promise of the early twentieth century, embodied in one charming, dynamic, self-made man: department store tycoon Harry Gordon Selfridge.

Mr. Selfridge follows a colorful cast of characters whose lives and fortunes are entangled with the founder of the magnificent department store that bears his name: Selfridge’s. American retail visionary Harry Selfridge moves to London in 1906 with his family to establish the most ambitious department store the world had ever seen. While his dreams inspire many, they also challenge the staid conventions of British society.

A saga bursting with love affairs, class divisions, cultural clashes, ambition, betrayals, and secrets, Mr. Selfridge is set in an era when women reveled in a new sense of freedom and modernity. A charming, dynamic, brilliant, and forceful man who enjoys and respects women, Harry opens the doors of his opulent department story on London's famed Oxford Street to indulge, empower and celebrate them, changing the way the British—and the world—shopped forever.

Including a foreword by series producer Andrew Davies, this official illustrated companion to the series—the biggest ITV-produced drama of all time—takes fans on a journey through the world of the series, Selfridge’s, and the larger-than-life entrepreneur, husband, lover, and family man behind it. Rich with historical detail, The World of Mr. Selfridge examines the real man and the fictional character based on him, his relationship with his family, his genius for retail, and his flagship store, including its departments and changing fashions in the early twentieth century.

Complete with hundreds of gorgeous photographs, The World of Mr. Selfridge takes a closer look at the cast and their characters over the first two seasons, and looks ahead to series three, which begins in 1919—when Harry’s life really begins to unravel.