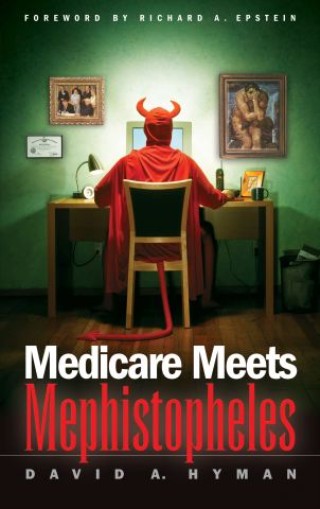 Let’s say you’re the devil, and you want to corrupt the American republic. How would you go about it? According to David Hyman, you might create something like Medicare, the federal health care program for the elderly. Hyman submits that Medicare may be the greatest trick the devil ever played. Medicare feeds on the avarice of doctors and other providers, turns seniors into health care gluttons, and makes regions of the United States green with envy over the dollars showered on other regions. The program exploits the sloth of government officials to increase the tax burden on workers and drag down the quality of care for seniors. Medicare makes Democrats lust for socialized medicine, while its imperviousness to reform makes Republicans angrier and angrier. Most of all, Medicare allows its ideological supporters to bleat and preen their way to the heights of moral vanity.

In the style of C.S. Lewis’ The Screwtape Letters, Hyman writes that Medicare has “freed the self-interest of these mortals from its natural restraints. As a result, the seven deadly sins have blossomed.” With epic political battles over Medicare and the future of limited government looming just over the horizon, Hyman uses satire to cast a critical eye on this mediocre government program.

David A. Hyman: David A. Hyman is an adjunct scholar at the Cato Institute and a professor of law and medicine at the University of Illinois. Hyman serves on the editorial board of the American Journal of Law & Medicine.